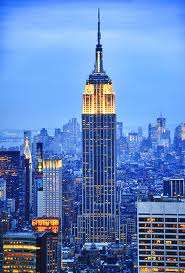 Your visit would not be complete without a trip to the Empire State Building of NYC. The Empire State Building in mid-town Manhattan has justifiably been called the eighth wonder of the world. No longer the tallest building in the world, it remains one of the largest office buildings and is currently the tallest in New York at 102 stories. Is it romantic? Remember the movie Sleepless in Seattle? This is where they met in the end and sealed their love!

The Empire State Building of NYC is an engineering marvel was built in record time at the depths of the Depression between 1930 and 1931, when it was completed in May. In some periods, more than two floors per week were being added at a time before many modern construction techniques.

The Empire State Building of NYC occupies a city block at 5th Avenue between 33rd and 34th Street, but can be seen from several blocks away (or several miles, at higher elevations). Art Deco in style, the building houses a visitor’s museum in the lobby and a viewing platform near the top. Security is strict and prices are relatively steep, but a great bargain for a two-hour tour and a stunning view.

In the lobby museum a visitor can learn all about the history of the building and the New York of the period generally. Also there are displays of interesting visuals discussing the ancient wonders of the world with which it’s often compared.

The lobby itself is something of a museum, too, with its large Art Deco golden wall friezes and lovely polished stone. Old-movie buffs will particularly appreciate the ambiance, which makes it easy to imagine living in the period.

The long elevator ride to the viewing platform is a good time to think about the accident in 1945 when a B-52 crashed into the middle of the building. Causing relatively minor damage, the fire was extinguished in less than an hour. However, the crash caused the elevator to fall. Not to worry, the elevator operator survived a 75-floor drop without a bruise. Thank you Mr. Otis, master elevator designer.

At the 86th floor, on one of the frequent clear days, a visitor can stand on the outdoor platform over 1,000 feet above the street. From there he or she can see the Statue of Liberty off the southern tip of the island, or all the way up to the top of Central Park at 110th Street.

The panoramic view also includes the shining aluminium-and-green-glass Citicorp, the post-modern AT&T, the steel-gargoyle-topped Chrysler, and several other prominent landmark buildings. Be sure to bring a camera, you will get some great shots of this romantic vacation spot.

If you get hungry, there are two restaurants and a sushi bar, as well as three coffee shops. Security rules forbid bringing in bottles, so make use of these instead.

And, in case you decide you never want to leave, you can rent one of the many offices and build a shower in the bathroom. You can use the Post Office or one of the two banks when you just can’t do business electronically. There’s even a drug store, for those days you got rained on using the viewing platform.

Once back down on street level again, be sure to stand across the street looking up. Imagine the many iron-workers who stood in the high winds and cold weather tossing red-hot rivets across the uncompleted floors. Then marvel at the Empire State Building of NYC, both a feat of engineering and masterpiece of art.

Have Fun On A Romantic Bahamas Island Vacation

Why A Romantic Weekend Couples Getaway is an Excellent Choice 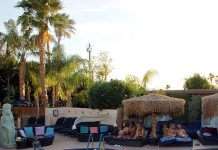